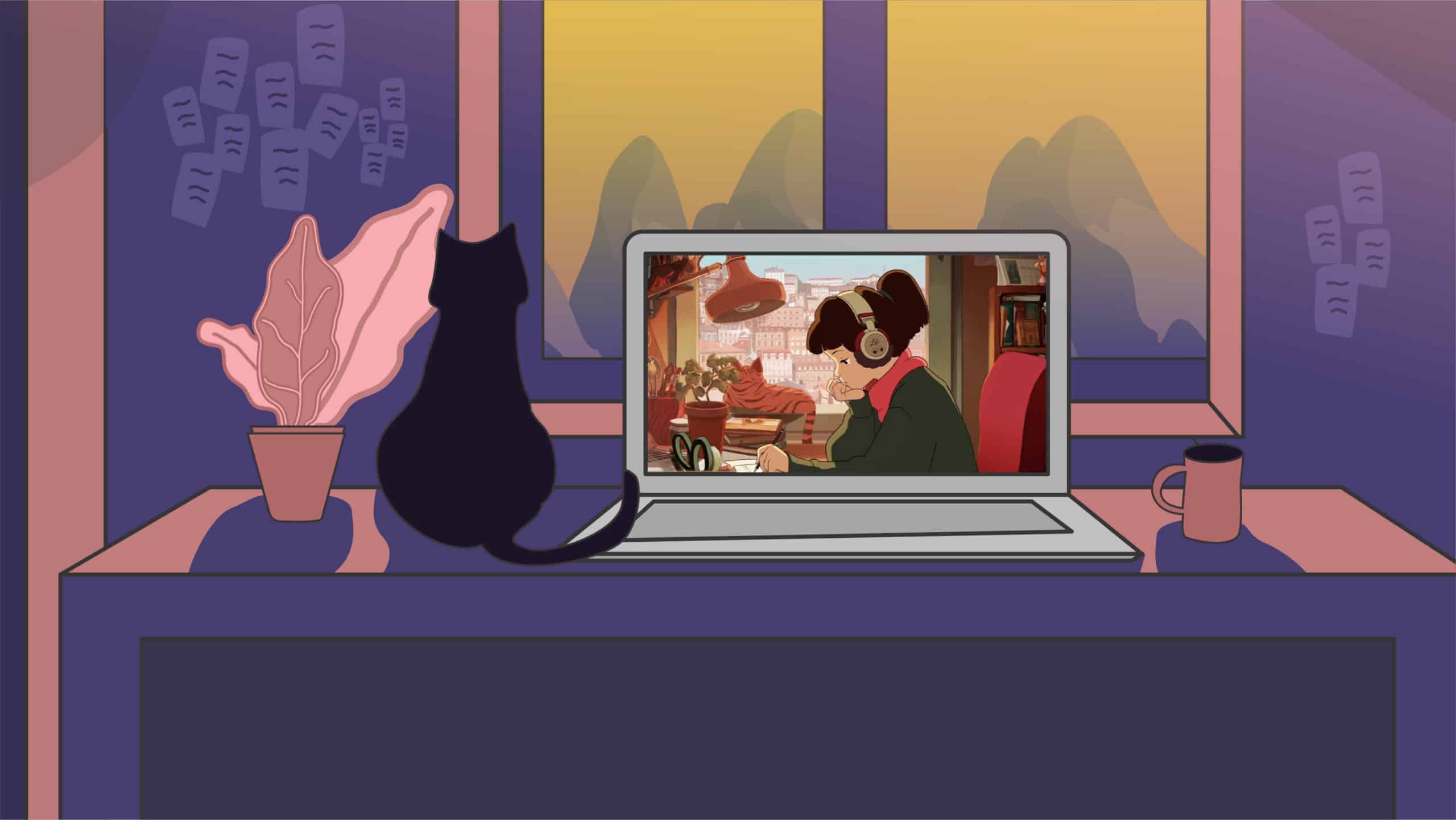 Lo-fi music is short for low fidelity music. It refers to music produced in less-than-stellar quality, often showing telltale signs of imperfections like record hiss, misplayed notes, or degraded audio signal. Lo-fi music also sometimes features environmental sounds that normally would have been considered noises: people talking, wind or rain sounds, or moving objects – the sort of things that would have been edited out in hi-fi recordings (high fidelity, typical clean and pristine recordings you’d expect from mainstream music production).

In the beginning, these mistakes were the result of what the industry called ‘bedroom recording’, low budget quality production employed by indie musicians. Over time, the so-called mistakes get incorporated intentionally to add a touch of uniqueness to the music. Because of its humble beginnings, many early lo-fi music came from hip-hop, punk and other underground genres. It has since gained popularity with the electronic and jazz genres as well.

Lo-fi music is characterized by its intentionally amateurish and homemade quality recording. Unlike crisp and clean sounding hi-fi recordings, lo-fi incorporates disruptive elements that would generally be regarded as flaws: record scratch, environmental noises, distorted audio signal. The style also extends to musical performances that are intentionally substandard (out-of-tune or out-of-time). The abstractness of these ‘mistakes’ gives lo-fi music a note of authenticity.

In modern vernacular, lo-fi music is closely associated with the chillwave genre, a subgenre of electronic music characterized by vintage, dreamlike, and psychedelic-inspired pop sound. The songs are typically slow to mid tempo (around 70 to 90 beats per minutes) with minimalistic lyrics, leading to its popularity for ambient music or study/work companion.

Although lo-fi began as a result of low budget, homemade music production, it soon gained popularity among music aficionados for its distinctive characteristics. Pioneering artists who popularized the sound include the Beach Boys (Smiley Smile and Wild Honey) and Paul McCartney (McCartney), although it’s R. Stevie Moore who is dubbed ‘the godfather of home recording’. In more recent times, experimental artists like Beck and Ariel Pink are known for embracing lo-fi aesthetics.

The sound gained prominence in the 1980s and 1990s with the cassette culture. During this period, the perceived originality of lo-fi over hi-fi production was embraced by many punk, indie rock, and hip-hop artists. Of course, the do-it-yourself aspect was also economically and artistically attractive for these indie musicians. In the late 2000s, lo-fi sound became the basis of the chillwave and hypnagogic pop music genres. The electronic music genre has also incorporated lo-fi elements, creating its own subgenre of lo-fi beats.

In the Gen Z era, the lo-fi aesthetic has entered mainstream popularity thanks to the nostalgia for all things analog. The beautifully flawed lo-fi sound fulfills Gen Z’s appetite for authenticity, an idea that rejects cookie-cutter, mass produced things in favor of more off-kilter alternatives.

One of the genre pioneers, Bas, Kyle and co curated Late Night Vibes playlist that perfectly captures the chill, relaxed ambience that one wishes for at the end of a tiring day.

The music on this playlist is on the rather sleepy spectrum of lofi, a great way to let your hair down at the end of a long day.

One of the pioneers in the lofi beats scene, Lofi Girl’s curation is without a doubt going to satisfy your ears as you play it to relax or study.

Another one of Lofi Girl’s beloved playlist, this one is tailored more for you to sleep and chill with. Lofi Girl has done it again – curating the perfect beat to lull you to sleep.

This playlist combines everything from jazzhop to ambient-driven beats. As long as it’s got chill vibes, they’ll have it.

Veering on the melancholic side of chillhop and lofi hip hop, this compilation is perfect for one of those gloomy nights where sleep might be a little hard to come by.

While other playlists lean on the mellowed side of lofi, this is one of the more colorful Spotify playlists related to chillhop and lofi hip hop music. Curated by DJ Natula, this playlist is perfect for when you’re feeling groovy.

Tsunami Sounds curated this chillhop tailor made to accompany the start of your week. But the best part is that Damon, the guy behind Tsunami Sounds, fosters the community with so much attention that this year, he plans on giving back 5% of their earnings back to the community.

Good ol’ groove to get you relaxing in the wee hours. Chill Beats Music has one of the most liked lo-fi playlists on Spotify for a good reason.

Updated monthly as the title suggests, you’ll never run out of good beats. The updates are tailored to the occasions of the month, from Halloween to Christmas, there’s always the perfect chill beats with the timely flavor all year round.