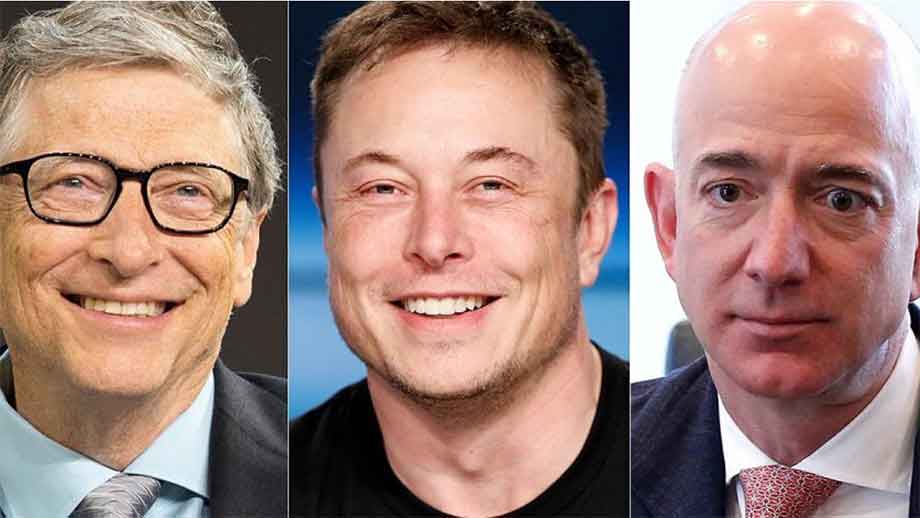 According to Forbes’ Annual World’s Billionaire List, there are 87 fewer billionaires this year than a year ago, with the total combined wealth of the remaining ones being $400 billion less. No doubt the ongoing pandemic, wars and global recession have something to do with it. Still, most of the figures who made this year’s top ten world’s richest list see their fortunes increase yearly. What is the key behind their ostentatious wealth? Let’s break it down.

Something of a maverick among billionaires, Elon Musk raises eyebrows with every controversial move or statement he makes. But when you’re the wealthiest man in the world, you’re bound to create a splash.

Most of Musk’s Fortune comes from his 21% stake at Tesla, the transportation company he co-founded. The other comes from SpaceX, the rocket company he envisions as humanity’s venture into Mars colonization. Following a funding round in December 2021, SpaceX is valued at $100 billion. And, of course, these days, Musk’s in the headlines for his $44 billion acquisition of the social media giant Twitter.

In 1994, Jeff Bezos founded e-commerce giant Amazon in his humble garage in Seattle. Today, Amazon accounts for nearly 40% market share of the total US e-commerce spending (per Fortune). The figure is expected to rise to 50% in the coming years.

Not to be outdone by Elon Musk, Bezos also owns media company The Washington Post and rocket company Blue Origin.

Despite this achievement, Bezos’ Fortune dips compared to last year. In 2021, Bezos sold $8.8 Billion Worth of his Amazon stock and stepped down as CEO to become executive chairman.

The undisputable luxury goods king of the world, Bernard Arnault’s LVMH empire, owns iconic brands such as Louis Vuitton and Christian Dior, to name a few. In January 2021, LVMH scored the most significant luxury brand acquisition ever when it purchased jewellery company Tiffany & Co for $15.8 billion.

The company entered the hospitality market when it spent $3.2 billion in 2019 for Belmond Group, which owns or manages 46 hotels, trains and river cruises.

Bill Gates co-founded software behemoth Microsoft with Paul Allen in 1975. Since then, Microsoft has consistently become the leading software and computing company globally. Gates has since invested his Microsoft fortune into other ventures such as zero-carbon energy and farmland acquisition (Gates is said to be one of the largest farmland owners in the US).

To the nonprofit Bill and Melinda Gates Foundation that he co-founded with ex-wife Melinda, Gates has donated an estimated $35 billion worth of stock in the fight to end “poverty, disease and inequity around the world”.

Arguably the most successful investor in business history, Warren Buffett is a mainstay on the annual world’s billionaires list for a reason. His holding Berkshire Hathaway is a multinational conglomerate that wholly owns the likes of Duracell, Dairy Queen, BNSF Railways and GEICO. The company also owns minority (but by no means minuscule) stakes in public companies like Kraft Heinz Company, The Coca Cola Company, Bank of America, American Express, and Apple.

With a vast investment portfolio dating back decades, he earns the moniker “The Oracle of Omaha” and holds the distinction as the oldest in the Top 10 list. Still, at 91, Buffett shows no sign of slowing down.

Larry Page co-founded Google with his Stanford classmate Sergey Brin in 1998. Since then, Google has become the undisputed leader in the global search engine market. Until December 2019, Page was the CEO of Alphabet, Google’s parent company. Today, he remains a board member and a controlling shareholder.

Sergey Brin owns a controlling stake in Google’s parent company Alphabet with fellow co-founder Larry Page. In December 2019, he stepped down as President of Alphabet but remained a board member.

The two co-founders have been missing from Alphabet’s public events since the end of 2019. Brin is reportedly working on a high-tech airship project.

Born a Jewish Russian before his family relocated to the US when he was 6, Brin is the richest immigrant in America. He’s known to be vocal against former President Donald Trump’s immigration ban.

Larry Ellison is the founder of the software company Oracle. With a 35% ownership stake, he also serves as the company’s chairman and chief technology officer. Ellison was the CEO of Oracle for 37 years until he stepped down in 2014.

Oracle’s valuation keeps rising thanks to steady acquisitions of other software companies, the biggest being the $9.3 billion purchase of NetSuite in 2016.

His other portfolio includes $3 Million Worth of stock at Tesla, where he is also a board member. Ellison’s two children, Megan and David, are prolific Hollywood movie producers with Zero Dark Thirty, The Terminator, and Mission: Impossible franchise titles.

The famously exuberant Steve Ballmer served as Microsoft’s CEO from 2000 to 2014. He oversaw the software giant throughout the first dot-com crash and the early days of competition with emerging Google and Apple.

In 2014, Ballmer retired, and among the first things he did was buy the NBA team Los Angeles Clippers for a whopping $2 billion. The same year was also when Ballmer began ramping up his philanthropy. He has donated over $2 billion to a fund dedicated to alleviating poverty.

The only Asian on the list, Mukesh Ambani’s wealth derived from Reliance Industries, the family conglomerate, deals in petrochemicals, oil and gas, telecom and retail.

Ambani inherited the business from his father, Dhirubhai Ambani, who founded the company – then a textile manufacturer – in 1966. He has since grown the empire to be a behemoth that employs 235,000 (2021). In 2022, the company’s net worth is valued at $233 billion.

In this article:richest people in the world, wealthy people